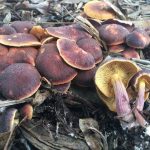 You may have seen my sticker & shirt design for the ‘Reishi Antlers’ – that’s the joke! When grown in a HIGH CO2 environment (important to note that the mycelium growing in the bag produces CO2), the morphology of Ganoderma species generally tends to produce an antler like stalk of an often candy corn colored fruiting body. When subjected to higher amounts of O2 (oxygen aka the ‘fresh’ of the Fresh Air Exchange FAE) the morphology becomes more conk or shell like. You can mix both styles as seen in the product photo, the bag was allowed to pin (baby mushrooms are technically called primoridia but we call them pins) for some time (growing mycelium produces CO2 therefore the area in the bag above the substrate CO2 dense and we see the response in the shape of the fruit body as ‘antlers’ – when the top of the bag was removed & introduced to fresh, humid air, it was allowed to blossom into absolutely GORGEOUS reishi conks. Reishi antlers, conks, or both?  You decide. Here’s how!

Also known as the Lingzhi or Hemlock Varnish Shelf, the Reishi genus is revered in ancient Chinese culture for its medicinal Red Reishi (Ganoderma lucidum) properties, said to promote virility and a healthy immune system. While for a long time this was only folklore, science is now beginning to reveal the unique qualities of these polypore mushrooms. With a leathery fruiting body not unlike lacquer in appearance and a vaguely sour taste, they are far from a choice edible, but can be brewed into a medicinal tea, and further fermented into a probiotic mushroom kombucha to promote digestive health.

Regardless of how you use this mushroom, the growing experience is reward in itself. The glistening red antlers reach through open space with glacial slowness, creating an atmosphere of something beautifully alien. They can take some months to mature but are relatively undemanding, preferring a basic sawdust substrate (preferably hemlock but most hardwoods are fine) and being more forgiving than other varieties in terms of airflow and humidity.