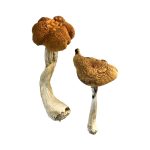 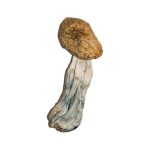 Mazatapec Magic Mushrooms (Psilocybe Cubensis Mazatapec Mexicano), along with P. Cubensis Huatla, were among the first Psilocybin Mushrooms introduced to the Western world. This scared and spiritual mushroom strain was discovered in Mazatapec, Mexico, a few hours south of Mexico City. The Mazatec indigenous people were the first to use these sh rooms. The Mazatec has a long history of spiritual healing with magic mushrooms.

Maria Sabina most likely first shared the Mazatapec strain with the renowned American ethnomycologist and banker R. Gordon Wasson. This strain was one of the first to inspire the western world to investigate the spiritual and magical healing properties of magic mushrooms.

The Mazatapec strain has light to dark brown caps and a medium stem. They are known to be slow to colonize and fruit. Expect a highly spiritual experience that will provide you with profound insights into yourself and the universe. During their spiritual sessions, our staff reported feelings of joy, fun, and euphoria. Beginners and veterans alike can enjoy this strain.

After 10-40 minutes of consuming Mazatapec magic mushrooms, you will feel euphoria and excitement in your mood. Depending on the dosage, you will notice mild to severe visual enhancements. Things may appear to be breathing, the environment around you may feel more alive, and you may find yourself in introspective thought. Music and art will look and feel different, and you will have a greater appreciation for them, as well as the ability to relate to them on a more personal level. The most common museum dose (0.5-l.5g) and moderate dose (2-3.5g) should last 3-6 hours. For more information, please see our Frequently Asked Questions section.

Mazatapec is one of many cultivated strains of P. cubensis, which may be the best-known, most popular species of “magic” mushroom. It is found almost all over the world, wherever the dung of large animals (its favorite food) is available but temperatures don’t get too low. The strains vary in their potency. Whether the trips they provide also vary qualitatively is difficult to say—so many factors can influence the mushroom experience that it’s difficult to be sure whether the choice of strain is one of those factors. But each strain does have its own reputation.  Mazatapec is considered an especially good option for beginners, or for anyone interested in spiritual exploration.

Mazatapec is easily confused with Mexican, since both have similar origin stories and offer a qualitatively similar experience[ii]. But the two strains are distinct.

Two things to keep in mind with “magic” mushrooms, though.

First, although these mushrooms are relatively safe as far as ways to get altered go, they can still cause problems, especially if the basic safety procedures are ignored. Second, using—or even just possessing—psilocybin mushrooms is illegal in most places. Please do not go to prison.

Psilocybin, the main “active ingredient” in most “active” mushrooms, causes changes in mood, changes in thought-pattern, and, at higher doses, hallucinations. Usually, the mood change involves euphoria and a sense of connection, but alternatively, it can cause intense anxiety. Some people say that the mushroom works to intensify whatever mindset the user had to begin with—one reason to prepare carefully for these experiences and to never trip alone. Changes in thought-pattern can include deep personal and spiritual insight. Taking time afterwards to process and integrate these insights is important, otherwise they are less valuable. Mazatapec Magic Mushrooms

Other effects include excessive yawning, nausea, and sometimes vomiting. Rarely, severe reactions, such as convulsions, can occur.

Mazatapec mushrooms are reported to give a very spiritual experience with particularly beautiful hallucinations and fewer bodily symptoms[iii] than most P. cubensis strains.