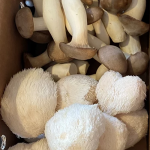 Clean live mother culture sent in 2ml Eppendorf tube. The epp tubes are sturdy and good for sending internationally. They seal hermetically and provide a safe means of transit. This species, while inedible, is strikingly beautiful due to its colors and cap texture. It can be easily cultivated on wood. Also available is Gymnopilus purpuratus, a similar species. You can select it from the options. Potentially available (inquire): Gymnopilus luteus Gymnopilus sapineus Gymnopilus thiersii

The species of Gymnopilus I have collected are just about the most prolific spore producers to be found among the gilled mushrooms, rivaled only by the Oyster Mushrooms. You probably won’t need to make a spore print in order to see the orange to orange-brown or rusty brown color of the spores, since spore dust frequently coats everything within a few inches of the mushroom. In fact, you should be careful what you touch after handling spore-coated specimens; I have a pair of jeans that still displays a nice Gymnopilus spore print, two years and many washings after wiping my spore-coated hands on my thighs Gymnopilus Luteofolius Spore Print.

But I don’t recommend using “over achieving spore producer” as an identifying feature, since my limited experience may not actually be representative for the genus. Better features to rely on include the growth on wood (for all but a few of the roughly 200 species worldwide) and the orange to orange-brown or rusty brown color of the spore print (on your jeans or on paper). Under the microscope, the spores in Gymnopilus are warty, and cheilocystidia are almost always present on the gill edges.

The principal sources of identification confusion are Pholiota and species in the deadly Galerina marginata complex. Under the microscope, species of Pholiota have smooth spores, which will separate them handily. Species of Galerina have a plage on the spore, while species of Gymnopilus do not. I am not stressing here several features that are often stressed in field guides (the sometimes bitter taste of Gymnopilus species, the black reaction to KOH, and the sometimes-present partial veil) because it is dangerous for a beginner to taste mushrooms that could be confused with Galerina marginata, and Gymnopilus collections are not always bitter, even when they’re “supposed” to be–and the KOH reaction and partial veil are also found in many Pholiota species.

Identifying the species of Gymnopilus, in North America anyway, cannot yet be done with scientific accuracy. Researchers (Guzmán-Dávalos et al., 2003) have discovered that the features traditionally used to sort out Gymnopilus species–spore dimensions, the absence or presence of a partial veil (and its persistence, if present)–do not successfully identify genetically distinct species within the genus. So, if your goal is not scientific accuracy but stubborn determination to put a Latin name on your mushroom collection, get out your microscope and see the traditional Gymnopilus treatments by Hesler and by Guzmán-Dávalos listed below. (However, Guzmán-Dávalos is the primary author of the paper that suggests these treatments, including her own extensive keys, are not necessarily accurate–so I have to ask you: if she is bravely willing to face scientific reality, why aren’t you?) The best we can do at the moment is to await further research and, in the meantime, refer to the major species groups that have been defined by previous treatments–keeping in mind the strong possibility that we will need to revise our ideas about how to separate the mushrooms.