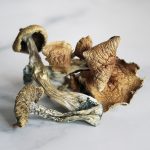 Crimini or Button Mushrooms are a more mature version of the white button mushroom, with a firmer texture. When fully mature, they grow much larger into the popular portobello mushroom. They? re nutrient-dense, full of potassium, phosphorus and antioxidants. We love to saut? them with butter and herbs to serve as a side dish, top meat dishes like grass-fed steak, or add to farm-fresh tomato sauce. Locally grown by farms who use sustainable growing practices.

Our 5 lb box of medium crimini mushrooms is perfect for all your recipes.

Did you know you can freeze mushrooms?  Simply saute and freeze.

The difference between these popular varieties of mushrooms is just age. The white button mushrooms, those very familiar kitchen staples, are simply the youngest variety. They have been cultivated, too, for that white color and soft texture. In the wild these mushrooms are usually browner.

• The portobello is the most mature mushroom here; it’s really just an overgrown white mushroom! They are left to grow for longer, until they have spread out into that delicious meaty cap.

• The cremini mushroom, then, is just in between these two varieties. It’s a moderately mature version of the white button mushroom, which is why it has a similar flavor. It’s younger than the portobello, but still related, which is why these are sometimes sold as “baby bella” or “baby portobello” mushrooms.

We enjoy the cremini mushrooms a lot; their slightly more mature state means that they have a browner color, firmer texture, and better flavor than the younger white mushrooms. We use them frequently in stews and soups, since we find that they hold up better in liquid.

What Are Cremini Mushrooms?

However, cremini mushrooms are still considered immature. Like their white counterparts, they’re young, not fully developed. So what do they look like when they’re fully mature? They become

How to Use Cremini Mushrooms