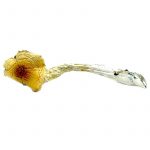 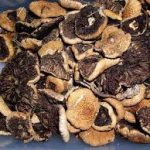 The?A. muscaria?mushroom belongs to the basidiomycete division of fungi, one of two divisions that create the Dikarya subkingdom, commonly referred to as the ?higher fungi.? This subkingdom of fungi forcibly dischargesballistospores into the air from their sterigma to?reproduce. Most of them reproduce sexually through their ballistospores, but a smaller number reproduce asexually using this same method. The?A. muscaria?reproduces both sexually and asexually, depending on whether or not the spores come into contact with the spores of another mating type. It has a distinguished appearance with a bright red cap, white stem, and white-to-yellow warts covering the cap. Amanita Muscaria

A. muscaria?contains the psychoactive?compounds?ibotenic acid and muscimol, and is classified as poisonous. Despite this, people throughout the world eat this mushroom. Siberian shamans may have been?using?it since as early as the stone age. The mushroom loses its poisonous compounds when properly cooked. Essentially, parboiling the mushroom twice weakens the mushroom?s toxicity and activates the psychoactive compounds.

The names fly agaric and fly amanita refer to the traditional use of the mushroom as an insecticide. Somehypothesize?the mushroom draws insects toward it from the compound 1,3-diolein that has intoxicating properties. Another possible?derivation?of the term fly agaric stems from the medieval belief that insects entering one?s head can cause mental illness. This relates to the psychoactive properties of the mushroom that during medieval times would be considered a form of madness.

The safe consumption of?A. muscaria?involves drying the mushroom out then either ingesting them or smoking them. The drying process slightly varies depending on whether the intention is to ingest the mushroom or smoke it.

Once you have a batch of fresh?Amanita muscaria?mushrooms, they must be dried to ensure poisonous compounds degrade prior to eating them. To safely dry out these mushrooms, place them on a newspaper or cloth then store them in a dark and dry environment. This process typically takes several weeks. To speed the drying process up, you can chop them into small pieces or heat them in an oven at no more than 75 degrees Celsius.

After completion of the drying process, the mushrooms are safe to eat. They can be consumed as is, baked into any type of food, or even made into a tea. To make them into a tea simply grind them into small pieces or a powder then place them in boiling water. This extracts the psychoactive compounds from the mushroom and into the water.

To dry?A. muscaria?mushrooms with the intention of smoking them, you must first peel the red skin and orange goo from the gills. Once the skin has been removed, place it on a pan with the red skin facing upwards. Place them in an oven at slightly under 75 degrees Celsius, checking frequently. When air bubbles form simply press them down with a fork or knife to ensure the entire piece dries thoroughly. Once the pieces are dried, you can grind them in a typical herb grinder and smoke them through a pipe or in a cigarette.

The first discovery of ancient people using the?A. muscaria?mushroom?occurred?in the early 19th century when Russian travelers began exploring eastern Siberia. In this area, shamans and the people used the mushroom together. The shaman consumed the mushroom then the tribesmen drank his urine to also ingest the psychoactive compounds. Some believe this process of drinking the urine of someone who just consumed the mushroom effectively filtered out the compounds that produced adverse effects such as sweating and twitching. Unlike eastern Siberia, western Siberian tribes only allowed the shamans to consume the?A. muscaria?mushroom as a way to produce a trance-like state.

While the effects of consuming the?A. muscaria?mushroom typically lasts between 6 and 8 hours, the duration and effects vary drastically. These huge variances in duration and effects are caused by the differences in potency between individual mushrooms. This also makes determining an appropriate dose extremely difficult. However, in general, effects include:

As with all mushrooms, misidentification of the mushroom poses a risk, although the unique appearance of the?A. muscaria?reduces this. Another risk involves the improper preparation of the mushroom leaving leftover toxins, most notably ibotenic acid. This risk is minimal, however, with the North American Mycological Association going as far as?stating?there are ?no reliably documented cases of death from toxins in these mushrooms in the past 100 years.? The other risk comes from the huge variances in potency found between individual mushrooms, particularly when picked during different seasons or in different geographic locations.